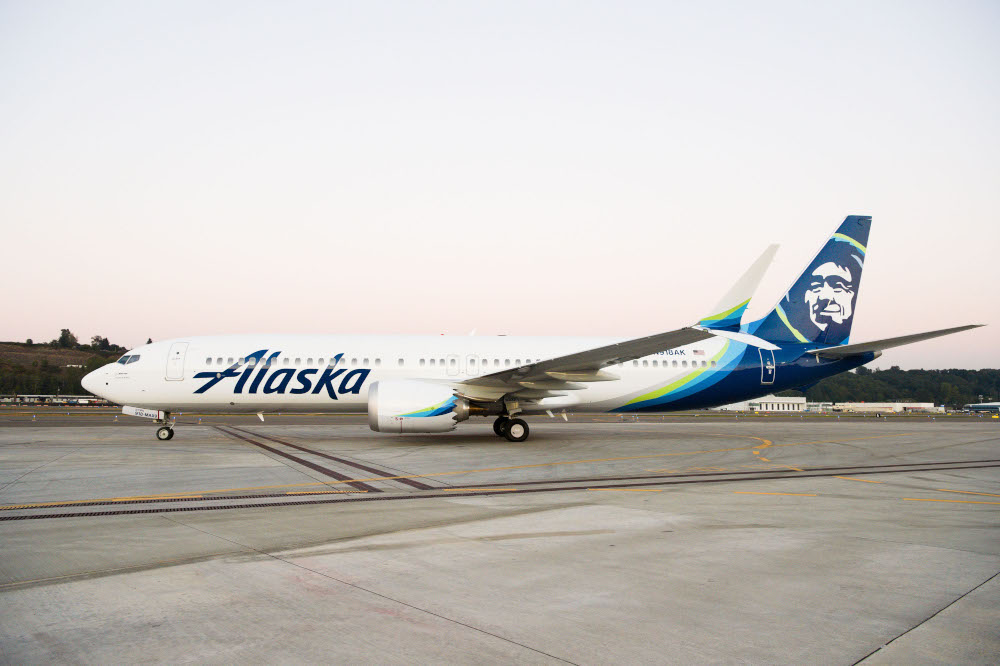 Today, Boeing and Alaska Airlines announced that the carrier is buying 23 more 737-9 airplanes, building on its original order and an agreement last month to acquire new 737-9s through lease. The new deal brings Alaska Airlines’ total 737 MAX orders and options to 120 airplanes, which will give the 5th largest U.S. carrier the scale, efficiency and flexibility to expand as air travel recovers.

Alaska Airlines and Boeing leaders announced the agreement during a signing ceremony at Boeing’s delivery facility in Seattle, flanked by a new 737-9 that will be among the first such jets to be operated by Alaska Airlines. Alaska Airlines, a longtime Boeing 737 operator, placed an order for 32 737-9 jets in 2012 as part of its fleet modernization program. Last month, Alaska Airlines announced it is expanding its commitment to the 737 MAX program by leasing 13 new 737-9s while selling some A320 jets it had taken on through its acquisition of Virgin America. Alaska plans to begin revenue service with its first 737-9 in March 2021, with 5 additional aircraft expected to begin flying by summer 2021.

The new agreement announced today will add 23 firm orders for the 737-9 and more options for future purchases. In all, Alaska will have 52 options which, if fully exercised, would take the carrier to as many as 120 737 MAX airplanes. The airline said the deal moves it toward a more efficient, all-Boeing mainline fleet that will “enhance the guest experience, improve operational performance and support the company’s growth.”

We’re planning for a brighter future. Today, we announced plans to add 68 new @Boeing aircraft to our fleet. pic.twitter.com/8z7BNedxGz

The 737-9 will replace all A319 and A320 aircraft in Alaska’s fleet to improve the airline’s overall operational, financial and environmental performance. With this plan, Alaska will reduce its Airbus fleet to 10 A321neos by the summer of 2023. The 737-9 is 20% more fuel efficient and generates approximately 20% less carbon emissions per seat than the A320. Its larger, improved engines fly significantly quieter, and the Boeing Sky Interior lends a feeling of spaciousness to the cabin. The 737-9 can also fly up to 600 miles farther, which opens the possibility of new nonstop routes and destinations.

Alaska Airlines says the 737 – equipped with new, more fuel-efficient engines and improved aerodynamics – will use 20% less fuel and reduce emissions by 20% per seat compared to airplanes it replaces. The airline will configure the jet with 178 seats in a 3-class configuration. The plane can fly 3,550 nautical miles, about 600 miles more than its predecessor. This additional capability will allow airlines to offer new and more direct routes to passengers. Every airplane will feature the new Sky Interior, highlighted by sculpted sidewalls and window reveals, LED lighting that enhances the sense of spaciousness and larger pivoting overhead storage bins. 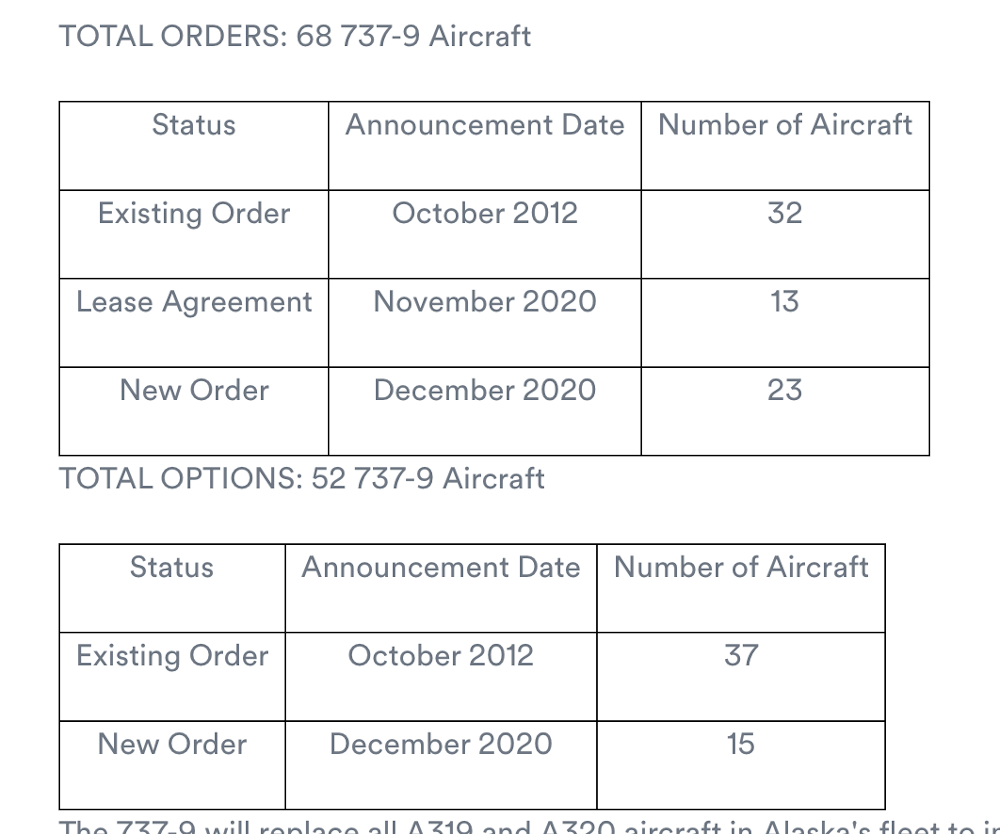 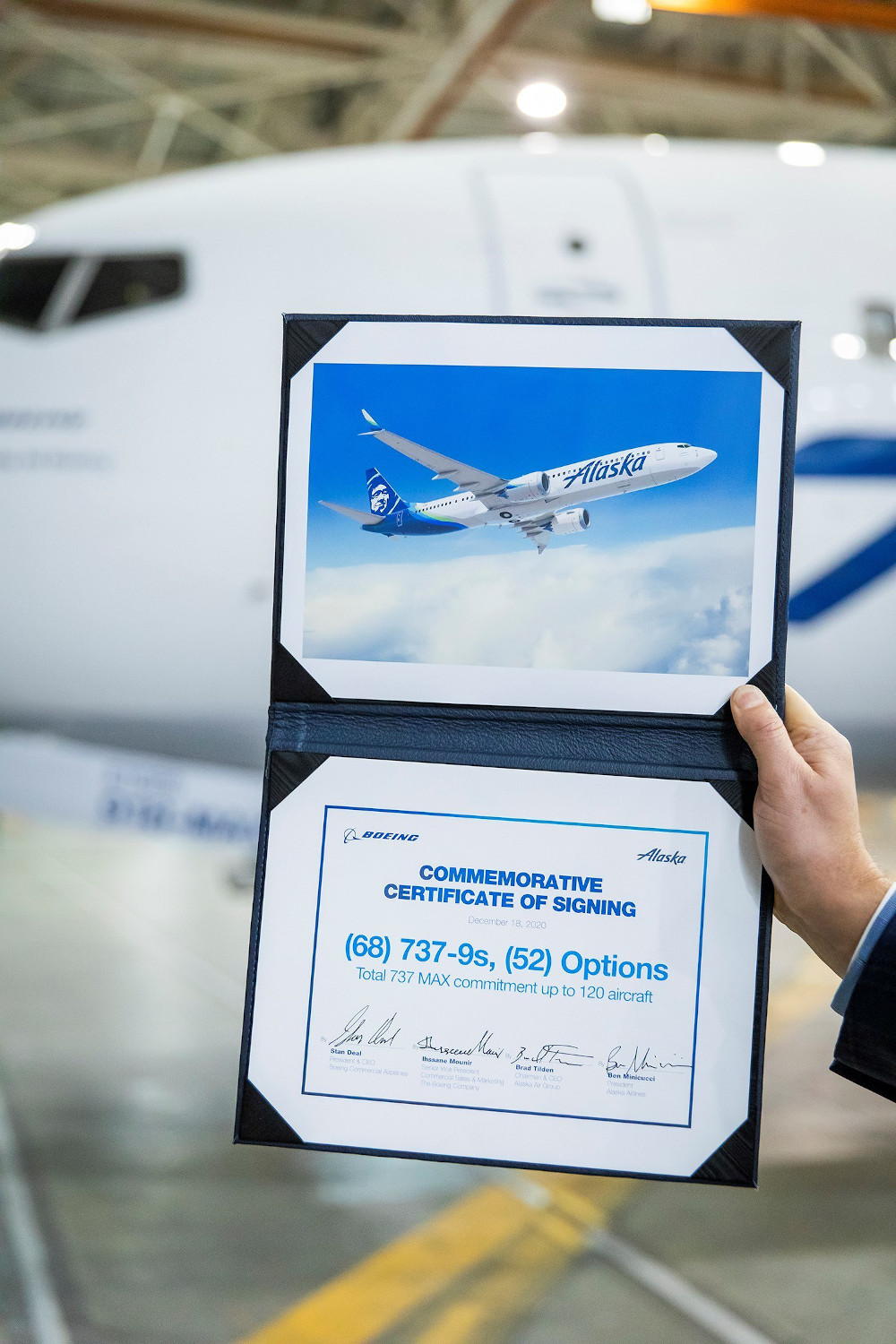 Commemorative Certificate of Signing on Dec. 18 between Alaska Airlines and Boeing for 737-9 MAX order.