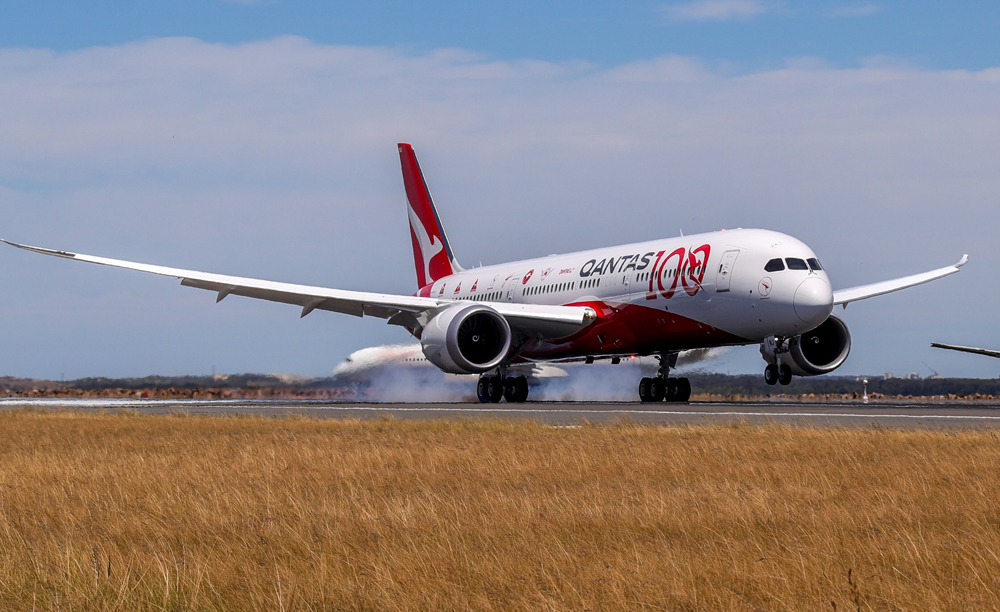 Qantas has kicked off 12 months of centenary celebrations with a non-stop London to Sydney flight. VH-ZNJ “Longreach”, a brand-new Boeing 787-9 Dreamliner, landed in Sydney at 12:28pm, 19 hours and 19 minutes after leaving Heathrow. It follows the non-stop New York to Sydney flight from October as the 2nd of three research flights aim at improving crew and passenger wellbeing on ultra long-haul services under consideration.

On-board there were 52 passengers, including Qantas CEO Alan Joyce, 6 cabin crew and 4 pilots. The direct flight reduced total travel time by around 3 hours compared with current one-stop services from the east coast of Australia. It is only the second time any commercial airline has flown this route non-stop, after Qantas flew a near-empty 747-400 in 1989. The new Dreamliner was met by more than 1,000 Qantas employees to mark the flying kangaroo’s 99th birthday and kick off 12 months of celebrations as it heads towards its centenary. The 3rd and final research flight will take place in December. A decision on Project Sunrise aircraft (Airbus or Boeing) will be made by year-end.

Three components of those celebrations were revealed today: special livery on the 787-9 Dreamliner that will be seen at airports around the world, featuring every Qantas logo since 1920; a $1 coin to mark the 100th that will enter circulation next year; and a touring exhibition that will visit a number of cities around Australia. Qantas will officially turn 99 years old, and begin its 100th year, tomorrow, Saturday 16 November 2019. The new 787 Centenary livery aircraft will fly across key Qantas international destinations, including Los Angeles, New York, San Francisco and London. Named “Longreach” after the Queensland town that was key to the airline’s origins, it joins 9 other Qantas 787s that are all named after things that are iconically Australian.

• QF 7879 flight London to Sydney flight time was 19 hours and 19 minutes. Touch down at Sydney International airport was 12:28pm
• The flight was operated by a brand-new Boeing 787-9 registration VH-ZNJ, named Longreach.
• The service was a re-purposed delivery flight. Rather than flying from Boeing’s factory in Seattle back to Australia empty, the aircraft was positioned in London to simulate one of the Project Sunrise routes under consideration by Qantas. All carbon emissions were offset.
• The flight departed London’s Heathrow Airport and flew across 11 countries including England, Netherlands, Germany, Poland, Belarus, Russia, Kazakhstan, China, Philippines and Indonesia before crossing the Australian coast near Darwin, tracking south east across Australia towards Sydney.
• Remaining fuel upon landing was approximately 6300kg which translates to about 1 hour 45 minutes of flight time. Photos: James D Morgan, Qantas.