VIDEO / Qantas bids farewell to its Queen of the Skies

Today, July 22nd, Qantas marked the end of an era with the departure of its last Boeing 747. The final 747-400ER in the fleet (VH-OEJ) has departed Sydney at 15:28 local time as QF7474 heading to LAX, bringing to an end 5 decades of history-making moments for the national carrier and aviation in Australia.

Qantas brought forward the scheduled retirement of the fleet by 6 months after the COVID-19 pandemic decimated international travel globally. After today’s take-off from Sydney, VH-OEJ has done a flyby of Sydney Harbour, CBD and northern and eastern suburbs beaches as well as a low level overfly of HARS Museum (Albion Park) where it dipped the wings in a final farewell to Qantas’ first 747-400, VH-OJA, which is preserved there. The aircraft then headed out over the Pacific Ocean, where it drew the Flying Kangoroo, as the sun sets on a 50-year love affair with Australians and their beloved Queen of The Skies.

Qantas took delivery of its first 747 (a -200 series) in August 1971, the same year that William McMahon became Prime Minister, the first McDonalds opened in Australia and Eagle Rock by Daddy Cool topped the music charts. Its arrival – and its economics – made international travel possible for millions of people for the first time. The fleet of 747 aircraft not only carried generations of Australians on their first overseas adventures, they also offered a safe voyage for hundreds of thousands of migrant families who flew to their new life in Australia on board a ‘roo tailed jumbo jet.

Qantas 747s were at the forefront of a number of important milestones for the airline, including the first Business Class cabin of any airline in the world. Their size, range and incredible reliability meant they were used for numerous rescue missions: flying a record 674 passengers out of Darwin in the aftermath of Cyclone Tracy; evacuating Australians out of Cairo during political unrest in 2011 and flying medical supplies in and tourists home from the Maldives and Sri Lanka following the Boxing Day Tsunami in December 2004. The last rescue missions the 747 flew for Qantas were to bring hundreds of stranded Australians home from the COVID-19 epicentre of Wuhan in February this year.

Qantas Group CEO Alan Joyce said the 747 changed the face of Australian aviation and ushered in a new era of lower fares and non-stop flights. “It’s hard to overstate the impact that the 747 had on aviation and a country as far away as Australia. It replaced the 707, which was a huge leap forward in itself but didn’t have the sheer size and scale to lower airfares the way the 747 did. That put international travel within reach of the average Australian and people jumped at the opportunity,” Mr Joyce said. 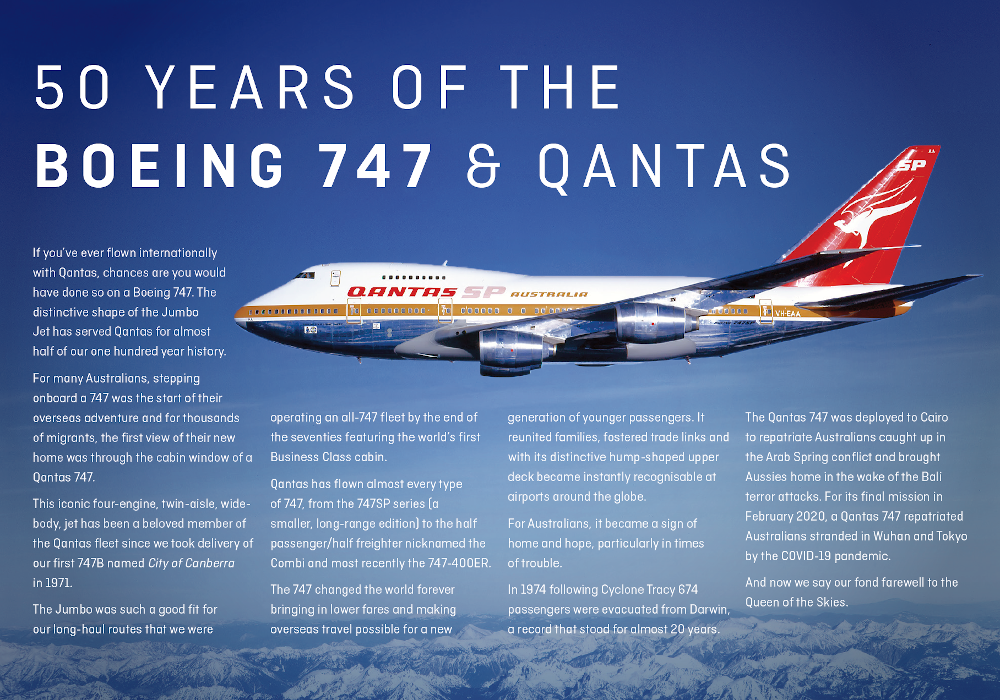 “This aircraft was well ahead of its time and extremely capable. Engineers and cabin crew loved working on them and pilots loved flying them. So did passengers. They have carved out a very special place in aviation history and I know they’ll be greatly missed by a lot of people, including me. Time has overtaken the 747 and we now have a much more fuel efficient aircraft with even better range in our fleet, such as the 787 Dreamliner that we use on Perth-London and hopefully before too long, the Airbus A350 for our Project Sunrise flights non-stop to New York and London,” added Mr Joyce. 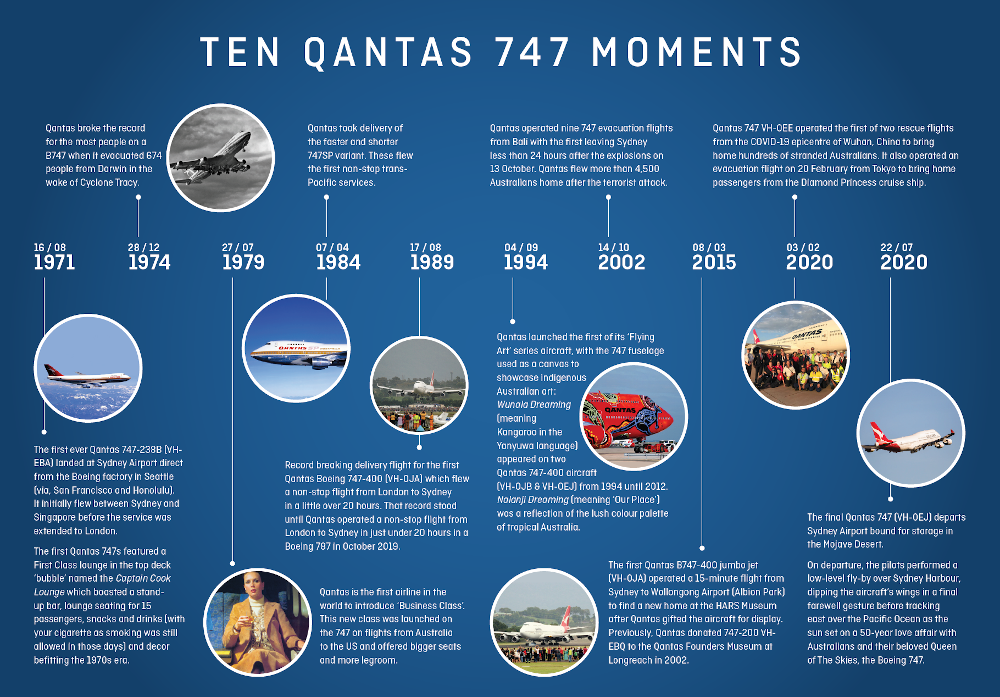 Qantas has flown 6 different types of the 747, with Boeing increasing the aircraft’s size, range and capability over the years with the advent of new technology and engine types. Qantas’s first female Captain, Sharelle Quinn, will be in command of the final flight and said the aircraft has a very special place in the hearts of not just Qantas staff, but aviation enthusiasts and travellers alike. “I have flown this aircraft for 36 years and it has been an absolute privilege”, Captain Quinn said.

Qantas' last jumbo jet taking-off for the final time from an Australian airport. QF7474, with registration VH-OEJ, is flying from Sydney Airport to Los Angeles where the 'The Queen of the Skies' will be retired after almost 50 years of service. More Details: https://7news.link/2ZMGxcc #Qantas747 #7NEWS

“From the Pope to pop stars, our 747’s have carried over 250 million people safely to their destinations. Over the decades, it’s also swooped in on a number of occasions to save Aussies stranded far from home.” Captain Quinn added, “It has been a wonderful part of our history, a truly ground breaking aircraft and while we are sad to see our last one go, it’s time to hand over to the next generation of aircraft that are a lot more efficient.” Captain Quinn and crew will fly the 747 to Los Angeles with a full cargo hold of freight before its final sector to the Mojave.

A Farewell Fit for a Queen

Farewell, Queen of the Skies ✈️ Today, the last 747 in our fleet, VH-OEJ departed Australia for the final time – adding a special display en roo-te to the US ????

HAPPENING NOW / Before continuing to LAX, then Mojave, Qantas' last Boeing 747-400ER (VH-OEJ) is drawing the Flying Kangoroo outside of Sydney. Follow #QF7474.

FINAL TAKE-OFF from Australia of a Qantas Boeing 747-400ER, bringing to an end 5 decades of history-making moments for…

Farewell to the Queen of the Skies!