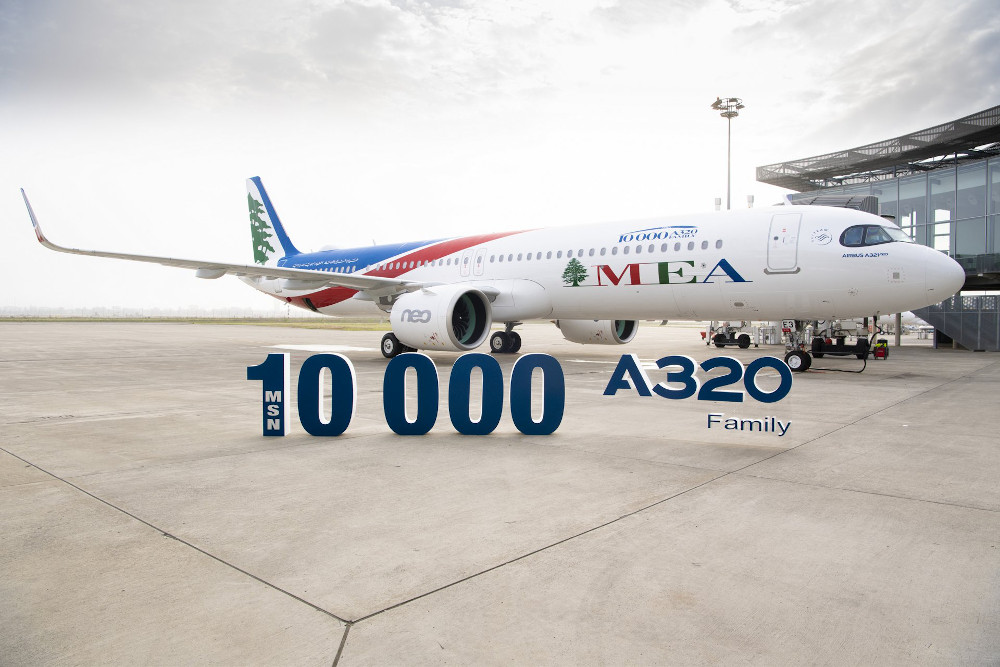 The A321neo (T7-ME3) is the third A321neo to join the all Airbus MEA fleet, taking the fleet size to 18 aircraft. Layout: 28 Business Class and 132 Economy Class seats. MEA received its first A321neo aircraft earlier in 2020 and will be taking another six A321neos over the coming months.

The handover of the aircraft took place in Toulouse in the presence of Mohamad El-Hout, Chairman and Director General of MEA. “We are honoured to receive the state of the art A321neo with its distinctive serial number 10,000 coinciding with the 75th anniversary of Middle East Airlines and specially after receiving MSN5,000 back in 2012. Since we first acquired an A320 Family aircraft in 2003, we have not only benefited from the outstanding operational efficiency of the aircraft but were also the first airline to introduce the wide-body cabin product on a single-aisle aircraft which has become a trend in the airline industry afterwards,” said MEA Chairman and Director General, Mohamad El Hout.

A day to remember for everyone at Airbus as we celebrate the delivery of the #A320 Family's MSN1️⃣0️⃣0️⃣0️⃣0️⃣aircraft – an #A321neo to @MEAAIRLIBAN.
MEA is no stranger to A320 milestones as it took delivery of MSN5000 in 2012. Here's to the latest milestone in this close partnership! https://t.co/7xtM4vnPaK pic.twitter.com/RR4LChHDFx

“Airbus is proud to continue building its long-standing partnership with Middle East Airlines which already operates one of the most modern Airbus fleets in the world. As an all Airbus operator, MEA benefits from the Airbus’ unique fleet commonality between aircraft families and is now adding the third highly fuel-efficient A321neo to step up the game. I admire the agility and the resilience of this company in this complex environment,” said Christian Scherer, Airbus Chief Commercial Officer. “Delivering MSN10,000 is a milestone that demonstrates the success of the A320 Family and we thank our customers globally for their confidence in our products.”

@MEAAIRLIBAN 10000th Airbus A320 Family Aircraft Rocking her wings on its delivery flight from the Airbus factory Toulouse Airport in France. #msn10000 pic.twitter.com/YjhudIIAVQ

MEA took on MSN5,000 in 2012, after 23 years of Airbus A320 Family production. The next 5,000 took just another eight years to mark this significant MSN10,000 milestone – again with MEA. This achievement is a testimony of the industrial advancement and capabilities by Airbus and the popularity of the latest, even more efficient NEO version of the aircraft. Incorporating the latest engines, aerodynamic advances, and cabin innovations, the A321neo offers a reduction in fuel consumption of 20% as well as a 50% noise reduction.