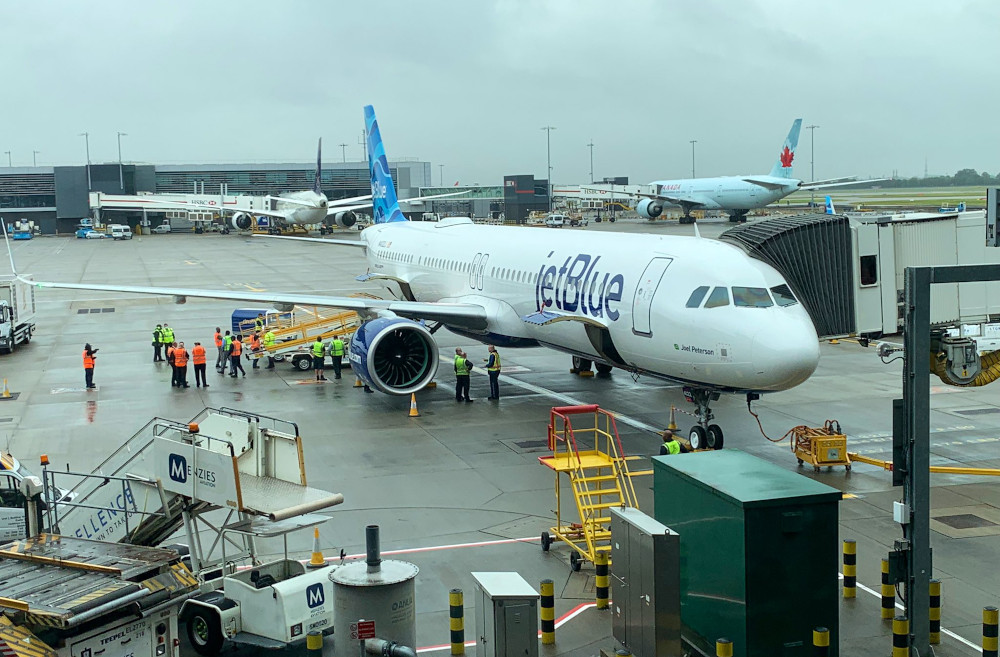 JetBlue has officially entered the transatlantic market with new, non-stop service between New York’s John F. Kennedy International Airport (JFK) and London Heathrow (LHR). The first customer-carrying JetBlue flight between the U.S. and the U.K. touched down at Heathrow just before 10 AM this morning, local time.

Flights between New York-JFK and Heathrow operate daily in August and 4 times weekly in September on JetBlue’s new Airbus A321 Long Range (LR) aircraft with 24 redesigned Mint suites, 114 core seats and the sleek and spacious Airspace cabin interior. JetBlue remains on track to add additional service between the U.S. and the U.K. with flights between New York-JFK and London Gatwick Airport (LGW) starting September 29, 2021. JetBlue will be the only carrier to offer service to the U.S. at Gatwick – the U.K.’s second busiest airport – creating another important presence in London where it can grow an even larger base of travelers. London service from Boston, where JetBlue is the leading airline, is planned to start in summer 2022.

The A321LR platform – offering the range of a wide-body but with the economics of a single-aisle aircraft – allows JetBlue to effectively compete, with award-winning service and low fares on flights between the U.S. and London. JetBlue converted 13 aircraft in its existing A321 order book to the LR version in April 2019 with the ability to convert more. Additionally, JetBlue has converted another 13 aircraft in its existing order book to the Extra-Long Range – or XLR – version of the A321.

This morning we welcomed our newest transatlantic airline partner @JetBlue to #Heathrow with their inaugural flight from New York!

New nonstop daily service, between Heathrow and the Big Apple. Find out more at https://t.co/SR23c9w0tN pic.twitter.com/tYlyU2CWLV

The A321LR allows JetBlue to tap into new long-haul markets, like London, that were not previously accessible with the airline’s existing fleet. The LR’s range of up to 4,000 nautical miles is made possible by three additional center fuel tanks and the aircraft delivers 30 percent fuel savings and nearly 50 percent reduction in noise footprint compared to previous generations of aircraft. JetBlue is also the global launch partner for the new Airspace by Airbus cabin, bringing long-haul style to the A321 for the first time ever. JetBlue’s A321LR is powered by two Pratt & Whitney GTF engines.

The highly anticipated milestone – aimed at shaking up the transatlantic market with the airline’s award-winning service and attractive fares – marks the first time JetBlue has served a destination beyond the 100+ cities it flies to throughout the Americas. With new service in the United Kingdom, JetBlue now operates in 26 countries.

“For the first time in JetBlue’s 21-year history we are crossing the North Atlantic and competing in one of the busiest travel markets in the world, well-positioned to introduce our award-winning service and low fares to a new global audience that is ready for a fresh choice in transatlantic flying,” said Robin Hayes, chief executive officer, JetBlue. “With JetBlue now connecting New York and London, travellers finally have the ability to enjoy low fares while also experiencing superior service. As the U.K. opens to travellers coming from America, our flights are well timed to meet the pent up demand for travel between our two countries. We look forward to welcoming U.K. travellers to the U.S. soon and launching service between Boston and London next year.” Main photo: Philip Stewart.