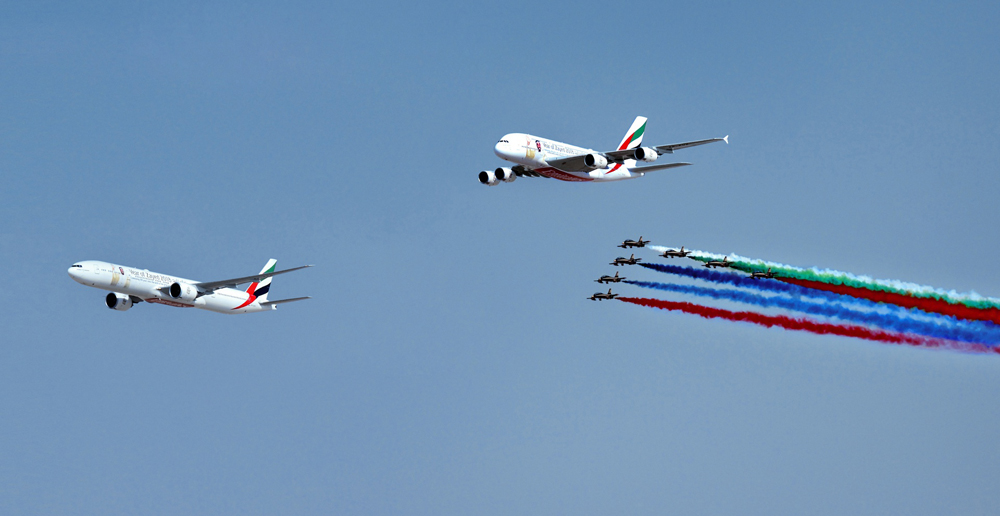 This Sunday, November 17th, Dubai Airshow 2019 begins at DWC airport. Over 87,000 trade attendees are expected at the event. Here’s what you can expect from the flying display, which will take place each afternoon between 14:00 – 17:00, from 17 to 21 November.

Military jets, civil aircraft and helicopters will be among the aircraft soaring above the DWC, Dubai Airshow site next week during the Dubai Airshow from 17 – 21 November, along with impressive aerobatic displays from some of the world’s most renowned aerial display team. A key part of the biennial event, the flying display is an impressive way for manufacturers to demonstrate their aircraft abilities to the global aerospace industry as whole, in addition to providing an impressive spectacle for the 87000 trade attendees expected at the event.

Aerobatic displays will include the French Air Force Patrouille de France, returning to the Dubai Airshow for the first time since 2011 and the UAE’s Al Fursan team. In addition, the world’s only aerobatic airline, UK-based display team The Blades, will perform at the event as part of their extended visit to the UAE. Also flying will be an Airbus A330neo and a Boeing 787-9 Dreamliner, as well as several helicopters including a Motor Sich Mi-2MSB-1 and an Mi38 and an ANSAT from Russian Helicopters. The F-22 Demo Team will also wow the crowds at the airshow.

French Air Force will be demonstrating a Dassault Rafale and the Royal Air Force from the United Kingdom will perform with a Eurofighter Typhoon. The UAE Ministry of Defence displays throughout the week will include a Mirage 2000 and an F-16. Info about the aircraft on static display.