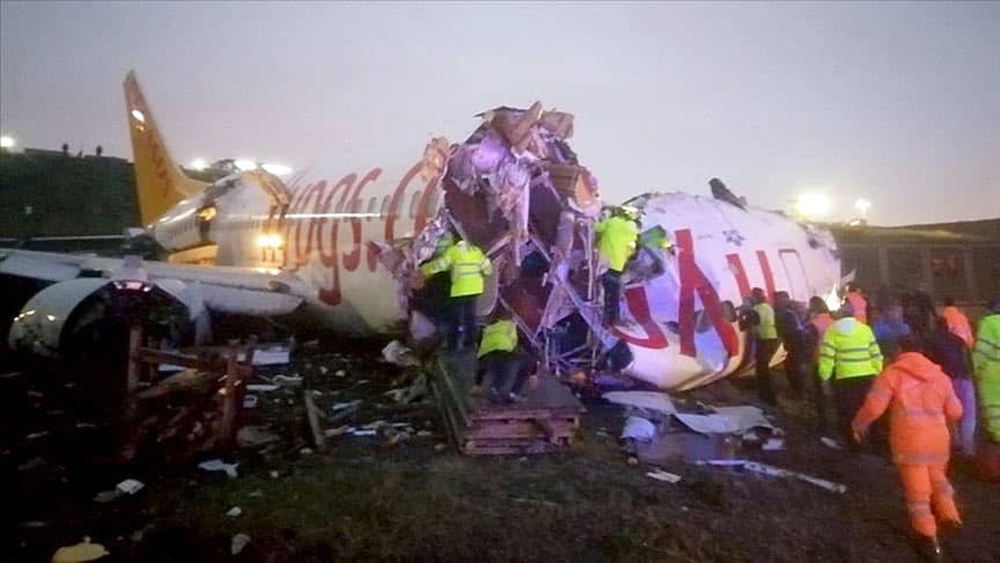 At 18:20 local time, the Boeing 737-800 (TC-IZK) overshot runway 06 at Sabiha Gokcen airport (SAW) coming from Izmir, flight PC2193, impacted a perimeter wall and broke in three. A fire also broke out, but was quickly extinguished.

Update 06 Feb / Pegasus Airlines has confirmed, this morning, that 3 people have died.

Update 22:00 / The latest report indicates one person has died and the pilots are in critical condition. Health Minister Fahrettin Koca stated that 157 persons have been injured.

There were 171 passengers and 6 crew members on-board. According to authorities, over 150 injured people were taken to hospitals. Around the time of the landing there were reports of 22 knots wind, gusting to 37 knots. After touching down on runway 06 at about 1950 meters past the threshold, the aircraft overran the end of the runway veering slightly to the left, hit the localizer antenna, fell into a ditch 30-40 meters deep and impacted the airport perimeter wall.

Istanbul Governor Ali Yerlikaya: “The plane could not hold on the runway due to poor weather conditions and skidded for around 50-60 meters,” Yerlikaya told reporters. The Boeing 737-800 split into three after falling 30-40 meters at the end of the wet runway. Footage showed the plane landing and continuing at a high speed off the runway. Photo: twitter.com/havarenamedya