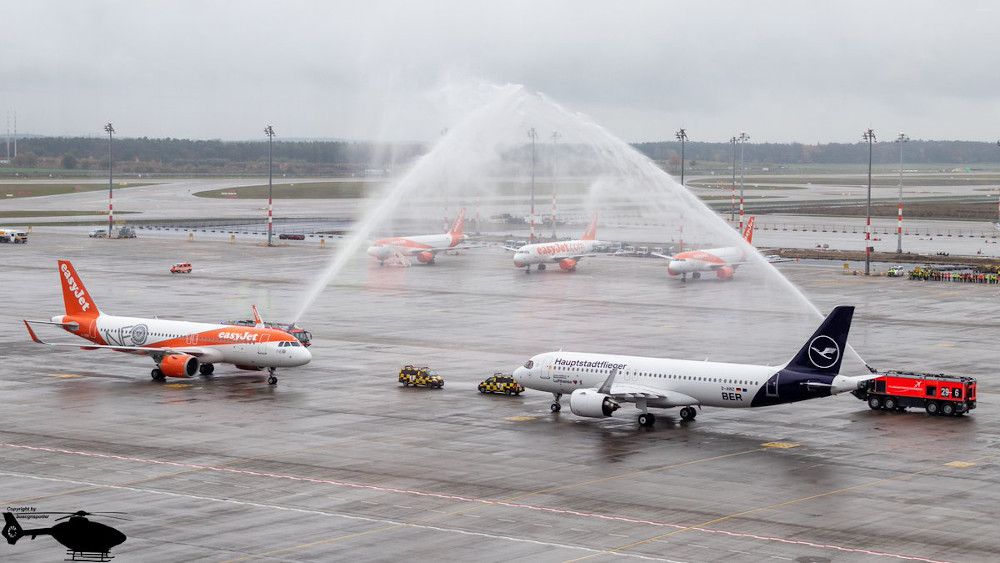 The new Terminal 1 at Berlin Brandenburg Airport Willy Brandt (BER) was opened today with the landing of the first two aircraft operated by easyJet (flight EJU3110) and Lufthansa (flight LH2020). The 2 Airbus A320neos should have performed a parallel landing, but because of the weather they’ve landed one after another on the same runway.

Upon arrival, the passengers, including easyJet CEO Johan Lundgren and Lufthansa CEO Carsten Spohr, were welcomed in Terminal 1 by the head of the airport company, Engelbert Lütke Daldrup. The symbolic opening act took place in a small circle and was also attended by the Minister President of the State of Brandenburg, Dietmar Woidke, the Governing Mayor of Berlin, Michael Müller, the Federal Minister of Transport and Digital Infrastructure, Andreas Scheuer MdB, and the Chairman of the Supervisory Board of the airport company, Rainer Bretschneider. The first commercial flights will arrive at Terminal 1 in the evening, while the first easyJet flight to London Gatwick will depart from here in the morning of 1 November.

BER boasts excellent transport links. In addition to a dedicated motorway connection, a new six-track railway station under Terminal 1 ensures direct access to rail services. The station had previously already been commissioned on 25 October 2020. It is expected that around two thirds of passengers will reach the airport by train. Numerous bus lines also connect the airport with Berlin and the surrounding area at frequent intervals.

Love at first flight 😍 Our brand new @Airbus #A320neo touches down for the first time at @BerlinAirport. 🛬 Who had the chance to sneak a peek? 👀 No need to be sad if you missed her: she will return to @MUC_Airport later today, around 5pm. #HelloBER pic.twitter.com/NVT81932jy

The airport covers a total area of 1,470 hectares, the equivalent of around 2,000 football pitches. Terminals 1 and 2 are located between the two parallel runways, while Terminal 5, the former Schönefeld Airport, is in the northern area. The two runways can be operated independently. In addition to the northern runway, which has been the main runway used so far, flights will also be operated from the southern runway starting from 4 November.

The new airport concentrates all air traffic in the German capital region in one location with a total capacity of over 40 million passengers per year. Around 25 million passengers can be handled at Terminal 1. This means that sufficient capacity is available at Germany’s third largest airport location. More passengers are expected to board and disembark at BER than at any other location in Germany. This modern infrastructure will allow for a significant increase in long-haul services and connecting traffic in the future. Main photo: twitter.com/boscgnspotter