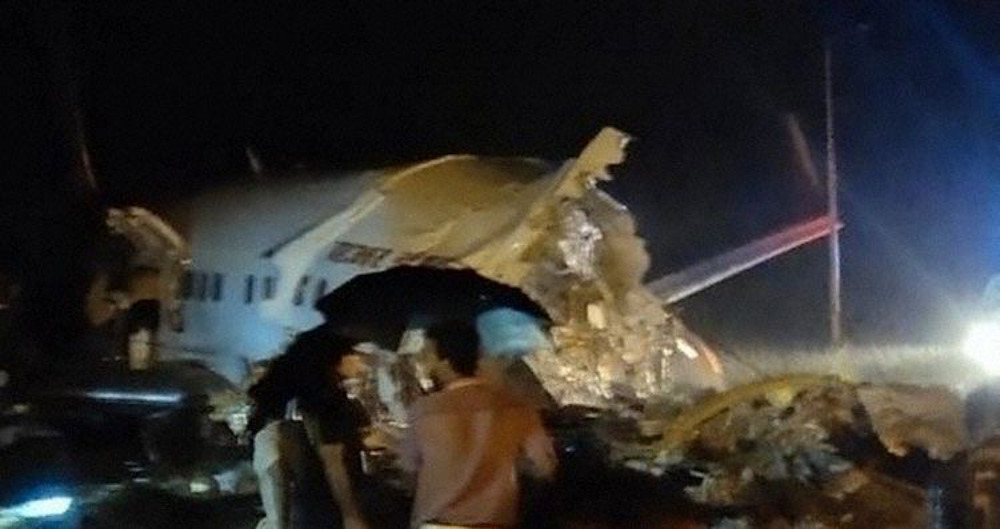 Update 8 August, 15:30 / Citing information from Air Traffic Control (ATC), the spokesperson said the aircraft touched down near taxiway ‘C’, which is around 1,000 metres from the beginning of runway 10. The total length of the runway is 2,700 metres. It was raining over the airfield and reported visibility at the time of landing was 2,000 metres.

Update 8 August, 13:00 / India’s Aviation Minister reported that both black boxes have been recovered. A few victims are still in critical condition.

Update 8 August, 07:30 / 18 people, including the two pilots, have lost their lives. 127 people are in hospitals, others have been released, said Hardeep Singh Puri, Civil Aviation Minister.

Update 20:15 / Officials report there are 14 fatalities, 15 injuries in critical condition and 123 injuries. A congressman said both pilots were killed in the accident.

The Directorate General of Civil Aviation (DGCA) said the plane landed in heavy rain and after landing on runway 10, it continued until the end and fell down in the valley and broke into two. At least 24 ambulances + fire trucks have been rushed to the airport. Initial reports from the scene state that 3 people have lost their lives (including one of the pilots, the other is in critical condition) and over 35 people have been injured.

Forwards..scary. Some people have also received spinal cord injuries, their life will be very tough ahead. Even a fracture pains when winter arrives (personal experience). pic.twitter.com/lWJWCs5DeO

18 people, including two pilots, have lost their lives, it is unfortunate. 127 people are at hospitals, others have been released: Hardeep Singh Puri, Civil Aviation Minister on #AirIndiaExpress flight that crash-landed at Kozhikode International Airport in Karipur yesterday pic.twitter.com/af6xGMdKEr

17 people, including two pilots, have lost their lives in the incident. pic.twitter.com/UUWTjAlTgZ

18 people, including two pilots, have lost their lives in the incident. pic.twitter.com/r1YRiIkbrM

The Directorate General of Civil Aviation (DGCA) said the plane landed in heavy rain and after landing at Runway 10, it continued running until the end and fell down in the valley and broke into two. At least 24 ambulances have been rushed to the airport. #IX1344 https://t.co/SHlsAGecjS

#IX1344 was operated by a Boeing 737-800 registered VT-AXH. The aircraft was delivered to Air India Express in 2006. https://t.co/ZrxHocoIxX pic.twitter.com/LqSrFgFCLC

No fire reported at the time of landing. There are 174 passengers, 10 infants, 2 pilots & 5 cabin crew onboard the aircraft. As per initial reports, rescue operations are on & passengers are being taken to hospital: Rajeev Jain, Additional DG Media, Civil Aviation Ministry https://t.co/tsiSSrpNTx

Google Maps satellite view shows that the runway at Kozhikode (CCJ) is raised up quite a bit over its surroundings with very little margin for error in an overrun. There doesn't appear to be EMAS at either end. #IX1344 pic.twitter.com/Cwtweyt01O