The world’s most punctual airlines in 2019 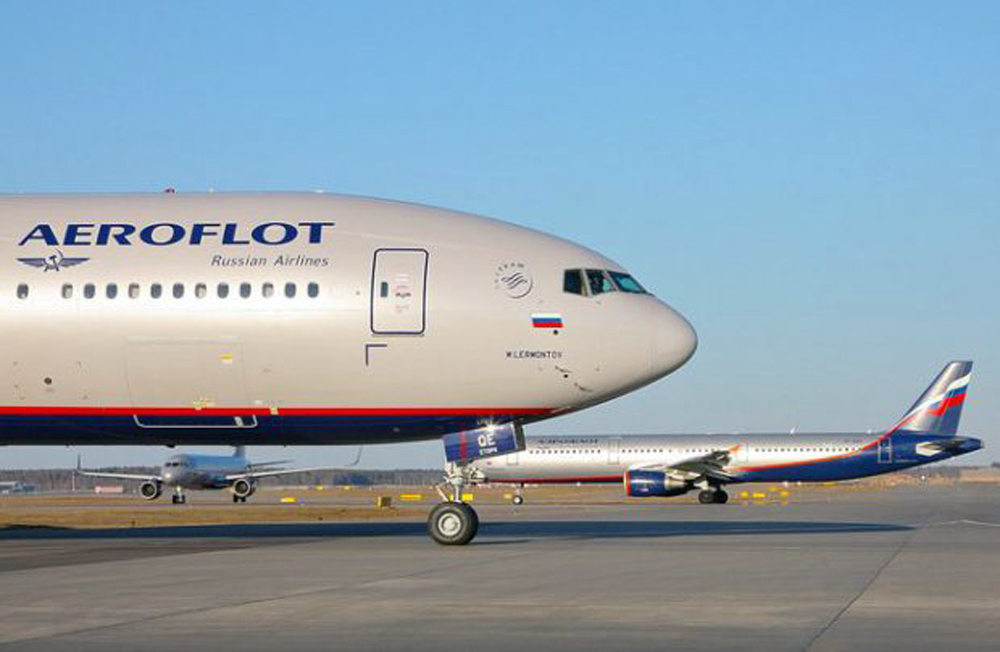 For the 11th consecutive year, Cirium’s On-Time Performance Review 2019 provides the definitive ranking of the world’s most on-time airlines and airports by size and region.

Designed by the world’s leading authority onaviation on-time performance excellence, travel data and analytics expert Cirium, it raises the benchmark by encouraging airlines and airports to innovate and invest to ensure they provide customers with best-in-class travel experience, both in the air and on the ground. With over 600 data sources, Cirium tracks more than 100,000 flights per day. A flight is on-time if the aircraft arrives at the gate less than 15 minutes of the scheduled arrival time.

The world’s most punctual airline

The 2019 review revealed Aeroflot as the world’s – and Europe’s – most on-time global mainline airline with 86.68% of its flights arriving on-time. Japanese carrier All Nippon Airlines (ANA) came in second place with 86.26%. ANA and Japan Airlines (JAL) were both near the top despite suffering major disruptions from very damaging typhoons in September and October 2019. In fact, ANA’s performance increased from 84.20% in 2018 to 86.26% in 2019. Last year’s former winner, US-based Delta Air Lines took third place with 85.69%.

Copa Airlines has again taken the premier place for mainline and network operations in Latin America for the seventh year in a row with an on-time performance of 92.16% for its mainline operations, an increase from 89.68% in 2018, and 92.27% for its network. With an on-time performance of 82.45% for mainline and network operations, Qatar Airways has maintained its position at the top of the league for the Middle East & Africa for the fifth consecutive year.

In North America, Delta Air Lines continued to demonstrate industry-leading on-time performance for the third year in a row. Delta Air Lines, the largest network carrier in the group by far, is earning business traveler loyalty with an excellent completed flight percentage of 99.36% across its network – a result of the success of its program to greatly reduce cancellations

All Nippon Airways (ANA) continued its streak of industry-leading operational performances by ranking first among Asia Pacific Mainline carriers in 2019. ANA had the highest on-time performance numbers across its Asia Pacific network in 2019 for the second year in a row with an on-time performance of 86.49%, increasing from 85.25% in 2018. Another win for the Asia Pacific region appeared in the Low Cost Carrier category. Japanese carrier Star Flyer topped the league of low-cost carriers with 91.37% of its flights recorded as being on-time. 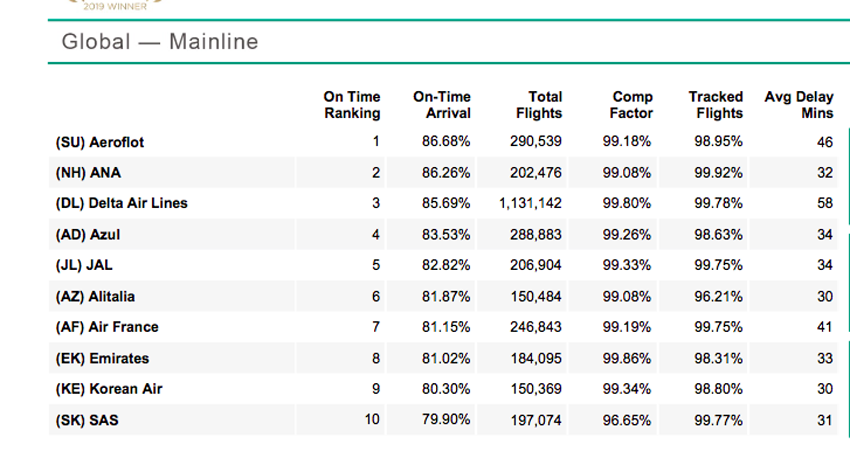 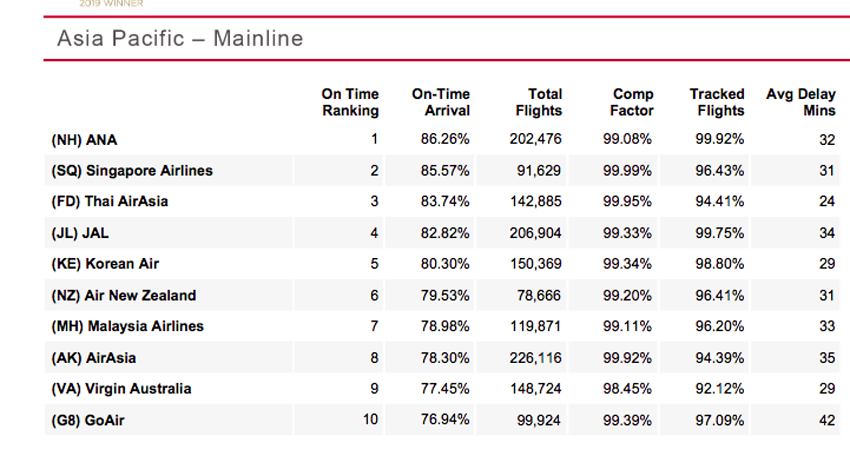 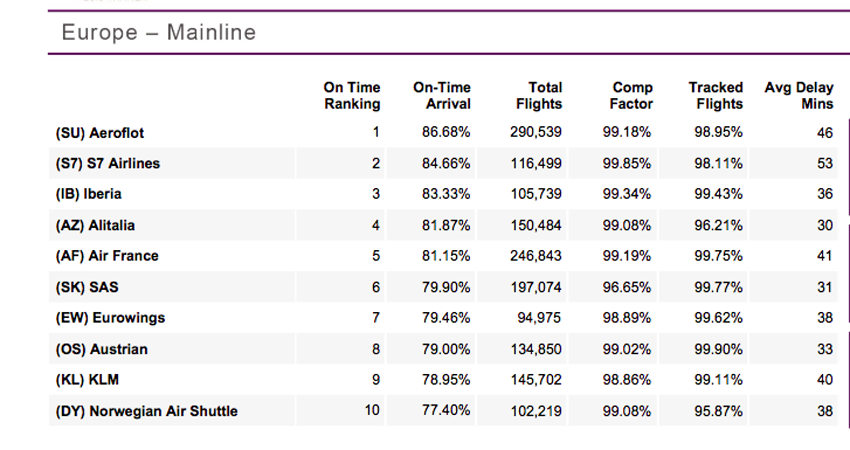 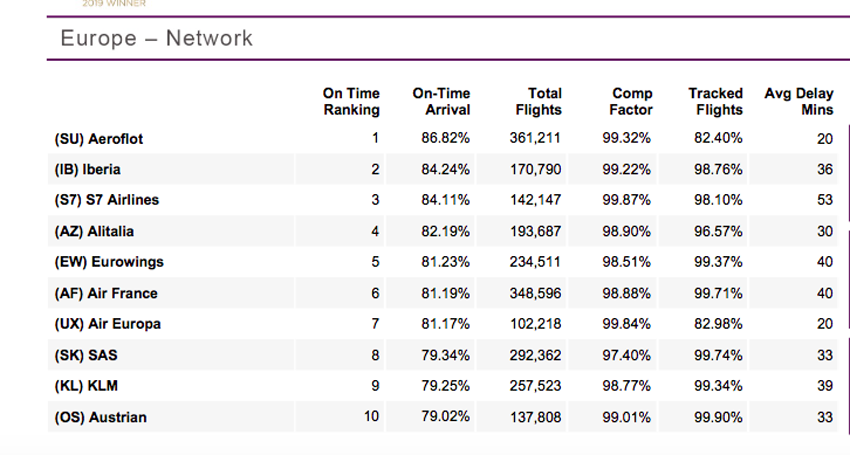 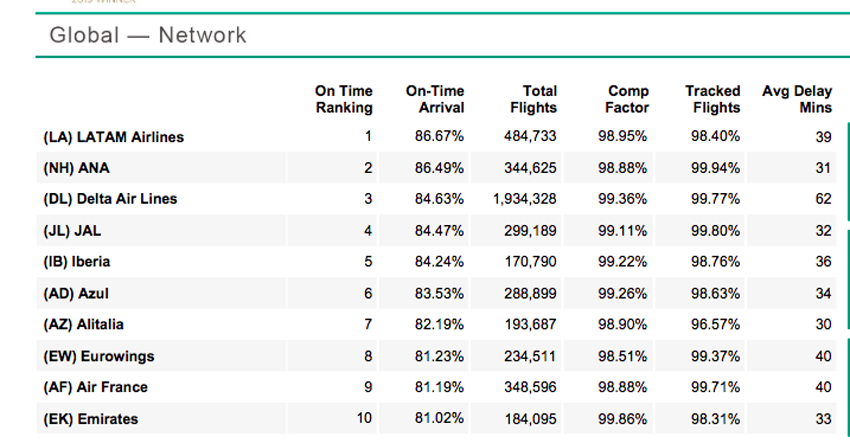 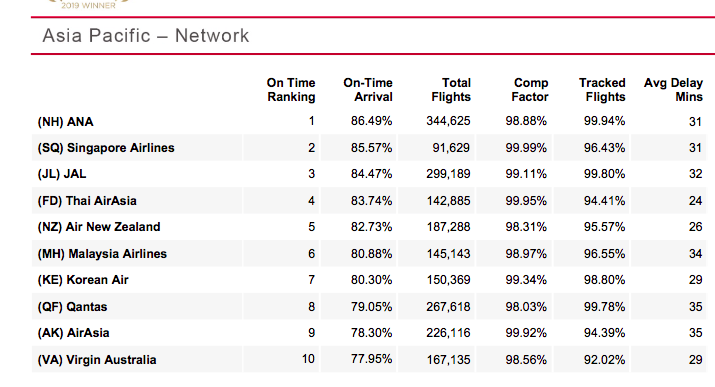 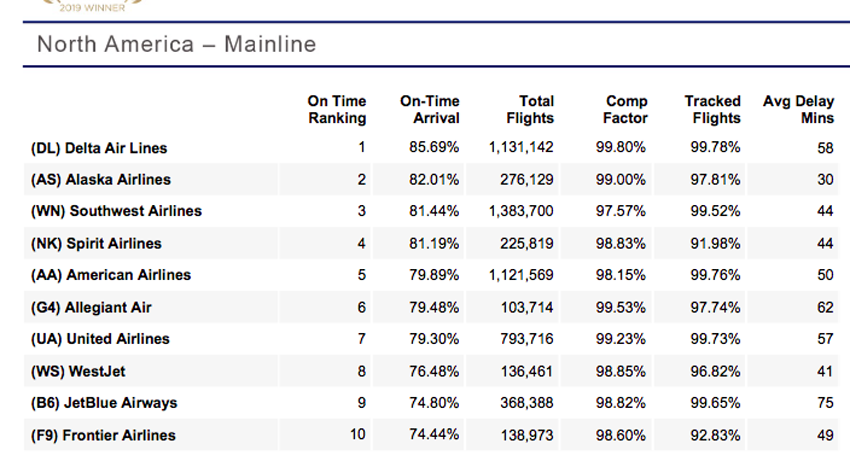 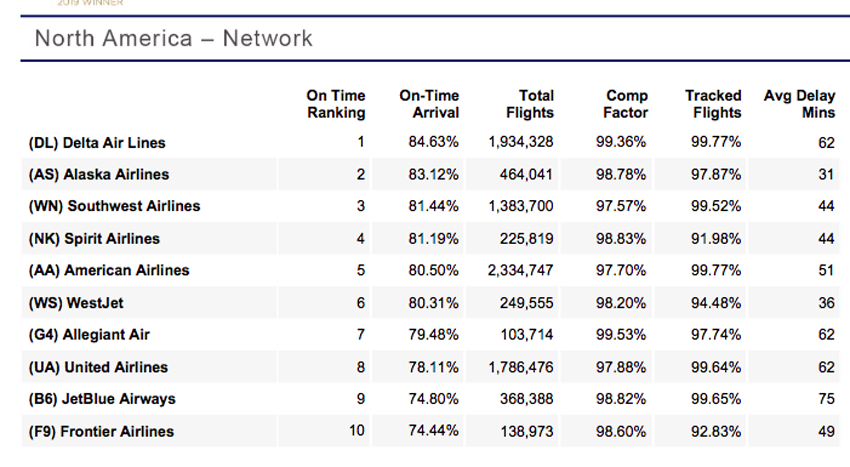 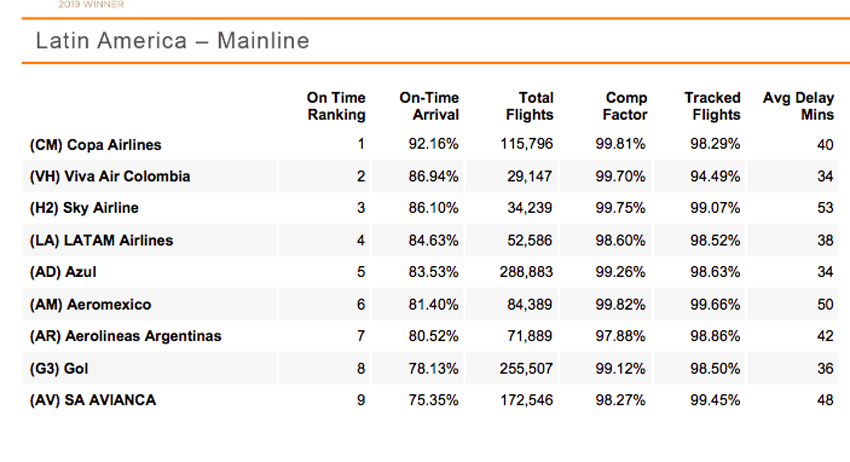 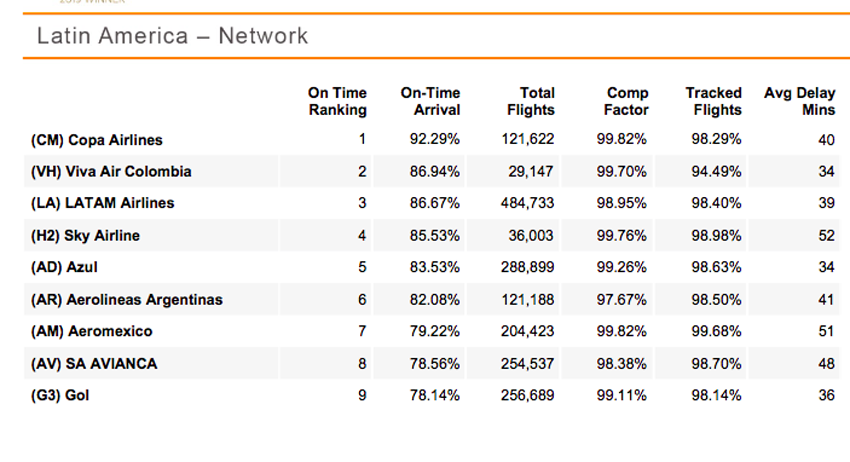 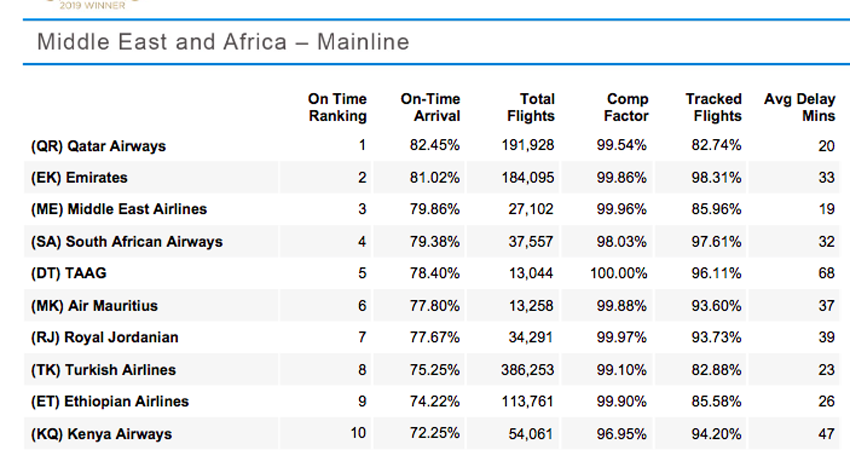 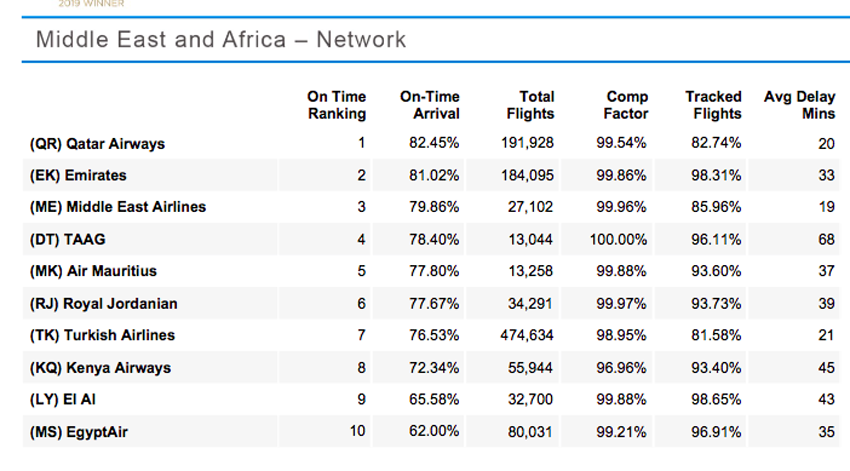 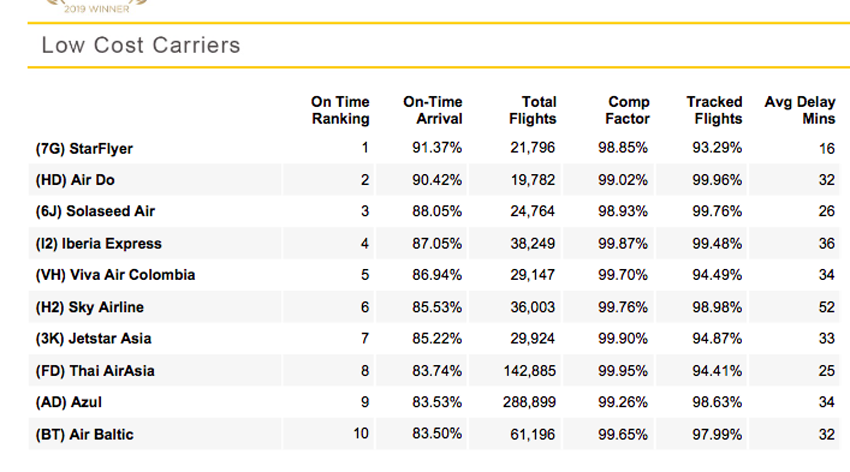