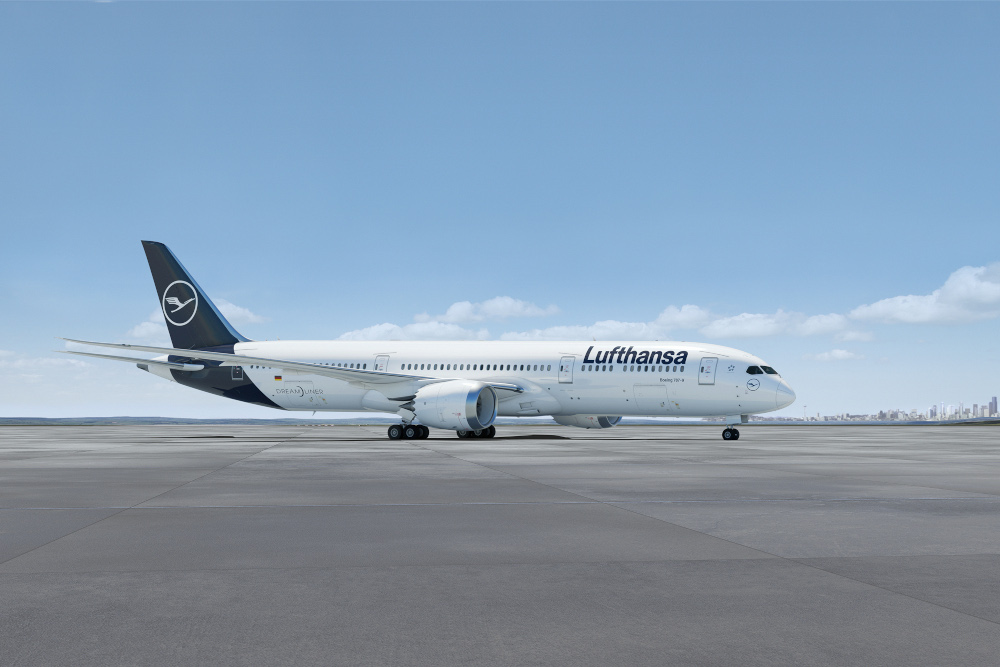 Lufthansa Group will continue to invest in the renewal of its fleet, in-flight and ground products and infrastructure. The aircraft on order serve mainly to replace older, less efficient models. The allocation of new aircraft to the different airlines and bases is constantly optimised according to value-based criteria. CEO Carsten Spohr says that he doesn’t see a return of the A380 into scheduled service from today’s perspective.

At the end of 2020, the Lufthansa Group fleet comprised 757 aircraft. The average age of the aircraft in the fleet was 12.5 years (previous year: 12.1 years). The fleet shrank year-on-year by 6 aircraft. A total of 22 new aircraft were added to the fleet, compared with 28 retirements. Fleet additions included 18 new aircraft (two Boeing 777Fs, two Airbus A350-900s, three A321neos and eleven A320neos) and four used A320ceos. In contrast, 19 aircraft were sold in 2020 (three Boeing MD-11Fs, three B747s, four A320s, two A319s and seven Bombardier Q Series aircraft) and leases were terminated for 9 aircraft. 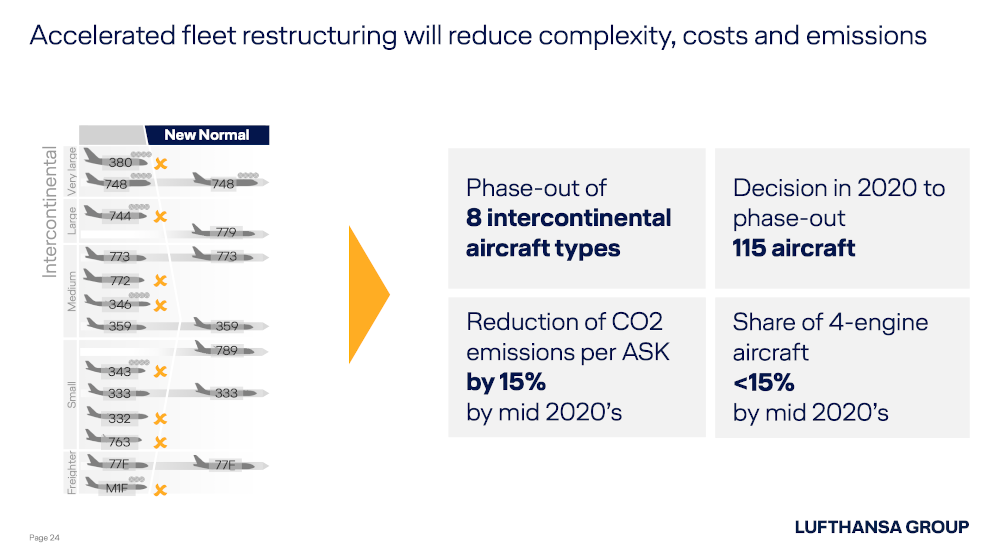 This means that the first steps were taken in financial year 2020 to reduce the operating fleet, including aircraft operated by non-Group airlines on behalf of the Lufthansa Group, by 150 aircraft. This measure will help adjust the number of flights and the capacity of the fleet to the market, which is expected to stay smaller in the longer term as a result of the crisis. In addition to phasing out the Group’s own aircraft, wet lease agreements with external partners were not renewed or were terminated in the 2020 financial year. Expiring dry lease contracts will not be renewed for the time being.

This reduction in the size of the fleet will be achieved primarily through the early retirement of older aircraft types. For example, the fleet reductions include three B767s at Austrian Airlines, three A330-200s at Brussels Airlines, three A319s at SWISS, five A321s at Eurowings, seven Bombardier CRJs at Lufthansa Cityline, and the entire sub-fleets of A340-600s (17 aircraft) and A380s (14 aircraft) at Lufthansa German Airlines. 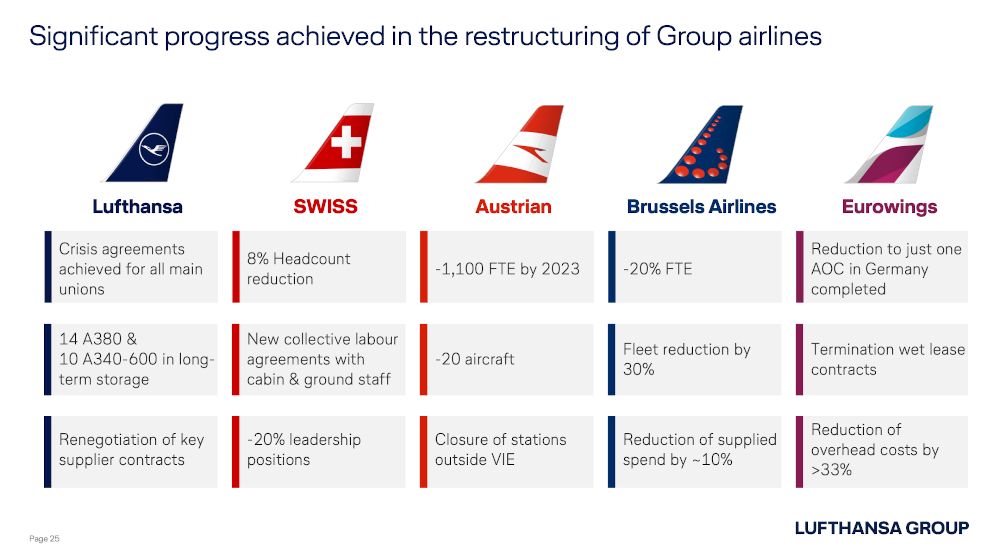 The A340-600 sub-fleets and the 8 A380s remaining after the agreed sale of 6 aircraft in 2022 and 2023 have been fully decommissioned for several years. The decision was also taken to immediately sell individual aircraft, in particular seven A340-600s, five Boeing 747-400s and prospectively 40 aircraft of the Airbus A320 family. Lufthansa Cargo’s 5 remaining MD-11F freighters will also be sold, but depending on the development of the freight market, there may still be flexibility to operate up to three MD-11Fs in the first half-year of 2021. 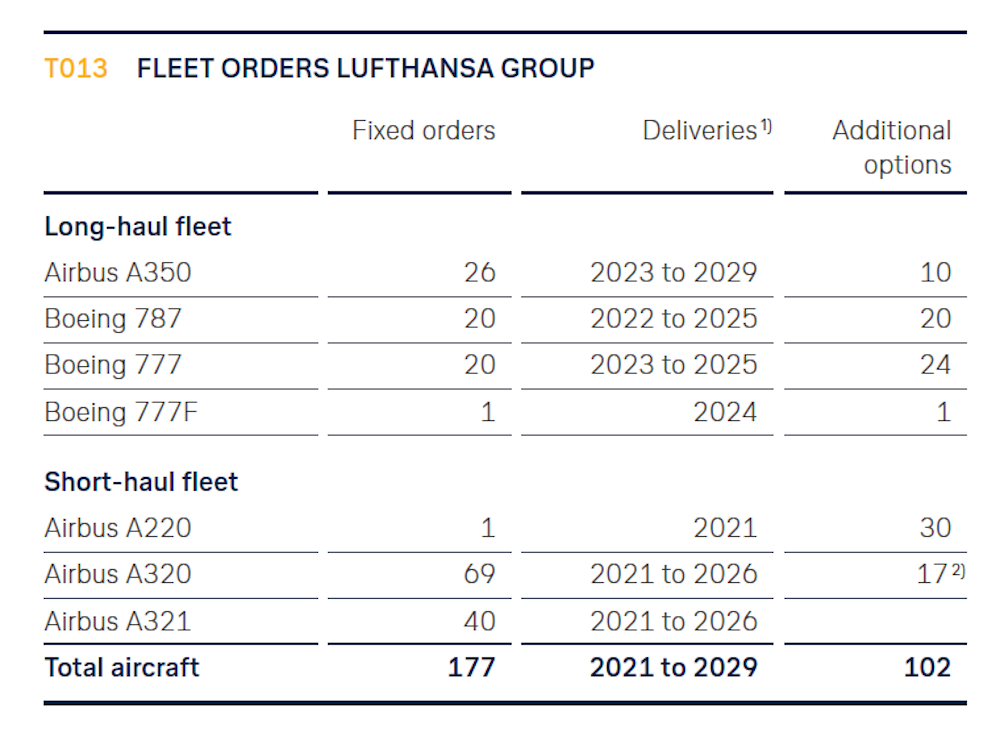 At year-end 2020, there were 177 aircraft on the Lufthansa Group’s order list. There are also options to buy a further 102 aircraft. The Lufthansa Group is expecting to take delivery of up to 12 aircraft (eleven aircraft of the A320neo family and one A220) in financial year 2021. In addition to the aircraft scheduled for permanent decommissioning, an additional 350 or so aircraft from all Group airlines had been temporarily decommissioned by the end of 2020. This involved parking the aircraft at various airports in Europe and abroad. The locations were selected with a view to keeping costs as low as possible while maintaining technical capacity. This will ensure the prompt reintegration of the aircraft into the operational fleet, if necessary, in order to maintain flexibility. 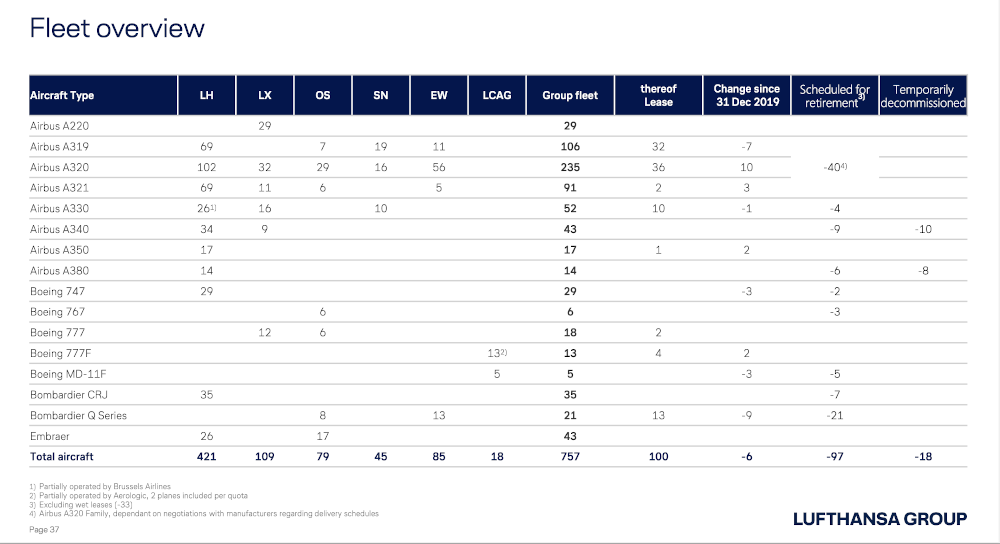 As part of the fleet strategy, the number of aircraft models in operation is being scaled back continuously across the Group in order to minimise complexity. The order placed in 2019 for 20 new A350-900s and 20 new B787-9s continues to constitute the foundation for a fundamental modernisation and optimisation of the long-haul fleet. In the short term, a conscious commitment will be made to deploy the most efficient aircraft types to serve the current route network, in particular new B777-300ERs as well as A350-900s and A320neo family aircraft. 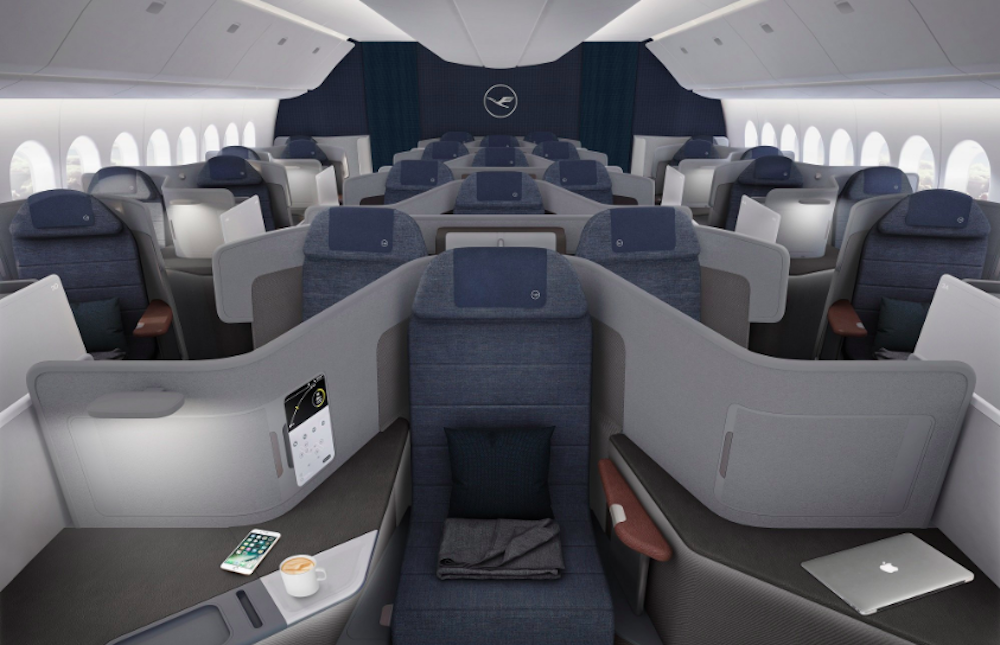 "We will introduce our new Business Class at the end of 2022, will announce on which type within the next months" says @lufthansa CEO Carsten Spohr now. Guess is it will be on the #Boeing787-9 #PaxEx #avgeek pic.twitter.com/6ycXlD7HCH

BREAKING @lufthansa CEO Carsten Spohr confirms: "We don't see a return of the #A380 into scheduled service from today's perspective" #avgeek pic.twitter.com/5wvGk4Ywm8