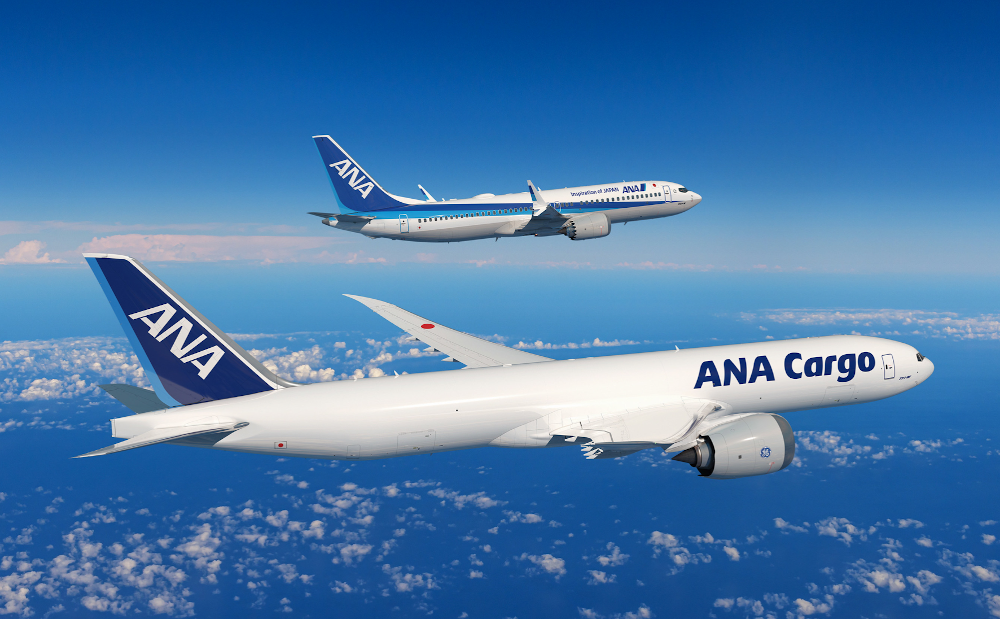 Boeing and All Nippon Airways (ANA) held a signing ceremony today at the Farnborough International Airshow to formalize an order for 20 737-8 airplanes, with 10 options in addition to the airline’s selection of the new 777-8 Freighter. ANA is the first 737 MAX customer in Japan and first carrier in Asia to choose the 777-8 Freighter. The order was previously unidentified on Boeing’s Orders and Deliveries website.

“We are pleased to partner with Boeing to introduce new airplanes into our world-class fleet that further our commitment to sustainable aviation,” said Koji Shibata, President and CEO of ANA HOLDINGS. “The efficiency, reliability and range capability of the 737 MAX make it an ideal airplane to refresh our narrow-body fleet and provide our passengers with the highest level of comfort onboard. In addition, the 777-8 Freighters will add flexibility and efficiency to our air cargo network. The 737 and 777 have long been a mainstay of the ANA fleet, and we look forward to continuing our partnership with Boeing with these new airplanes.”

“This is a tremendous milestone for ANA and Boeing as the airline has selected the 737-8 and 777-8 Freighter to further strengthen its passenger and cargo operations,” said Stan Deal, president and CEO of Boeing Commercial Airplanes. “ANA has remained at the forefront of commercial aviation by consistently investing in the latest airplane technology, providing their passengers with an unparalleled flying experience and more sustainable options to travel and deliver goods around the globe.”

With commonality and enhanced efficiency, the 737-8 will enable ANA to optimize its fleet across its operations while reducing fuel use and carbon emissions by 20% and noise by 50% compared to airplanes it replaces. The 737 MAX family has the latest CFM International LEAP-1B engines, advanced technology winglets and other aerodynamic enhancements to improve performance and reduce operating costs. More than 40 airlines globally are operating the 737 MAX, which has made over 680,000 revenue flights totaling nearly 1.7 million flight hours since late 2020.

ANA has converted two orders for the 777-9 passenger jet to the 777-8 Freighter. With the new freighter, ANA will be able to carry up to 10 tonnes more payload and fly further than the 777 Freighter with at least a 10% improvement in fuel efficiency, emissions and operating costs per tonne. Featuring the world’s largest composite wing and more efficient engines, the new 777-8 Freighter is ideally suited for operators committed to creating a more sustainable and profitable future. The 777-8 Freighter will interline seamlessly with ANA’s existing 777 Freighter fleet, using the same containers and pallets.

Based in Tokyo, ANA was the global launch operator of the 787 Dreamliner and is a launch customer for the 777X family. The airline currently operates more than 170 Boeing jets, including two 777 Freighters, 39 737s and the world’s largest 787 fleet with 77 Dreamliners including all three sub-models. This order will expand ANA’s order book to 61 Boeing airplanes including the 737 MAX, 787 and 777X.